We are thrilled to be able to hold a Summer show which runs from June 5th – 27th in both the house (gallery) and garden.  Lots of captivating sculpture pieces using different medium – a wide range suitable for small and large gardens.  All designed to give a wow factor.

An eclectic indoor display of art including ceramics, painting , printmaking and collage and sculpture. 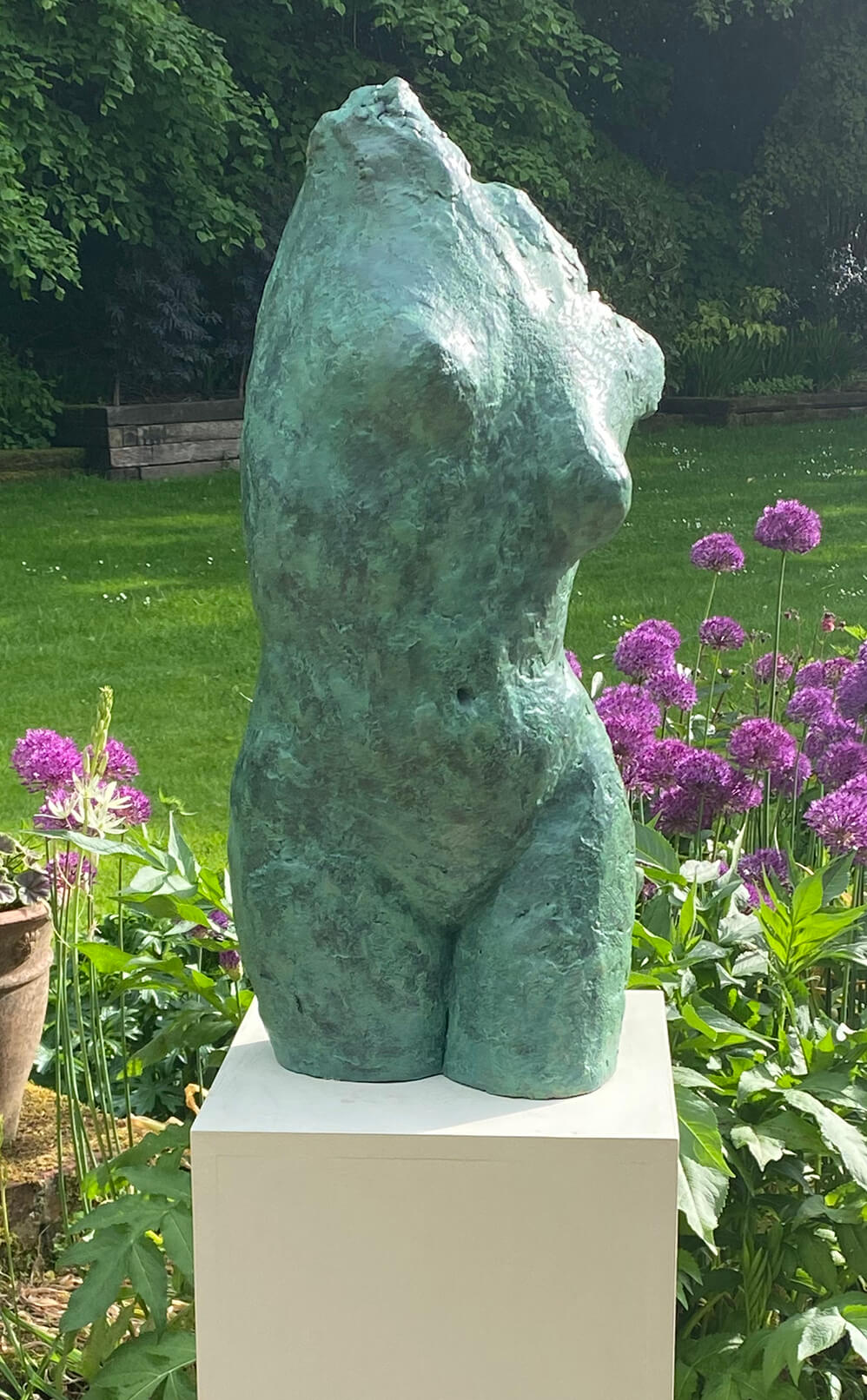 An interesting feature to any interior/exterior space. The truncated form depicts the female form stretching sideways with a gentle raise to the hip. Working directly from a life model and inspired by a variety of cultural references I enjoy celebrating the strength and beauty of the female form. 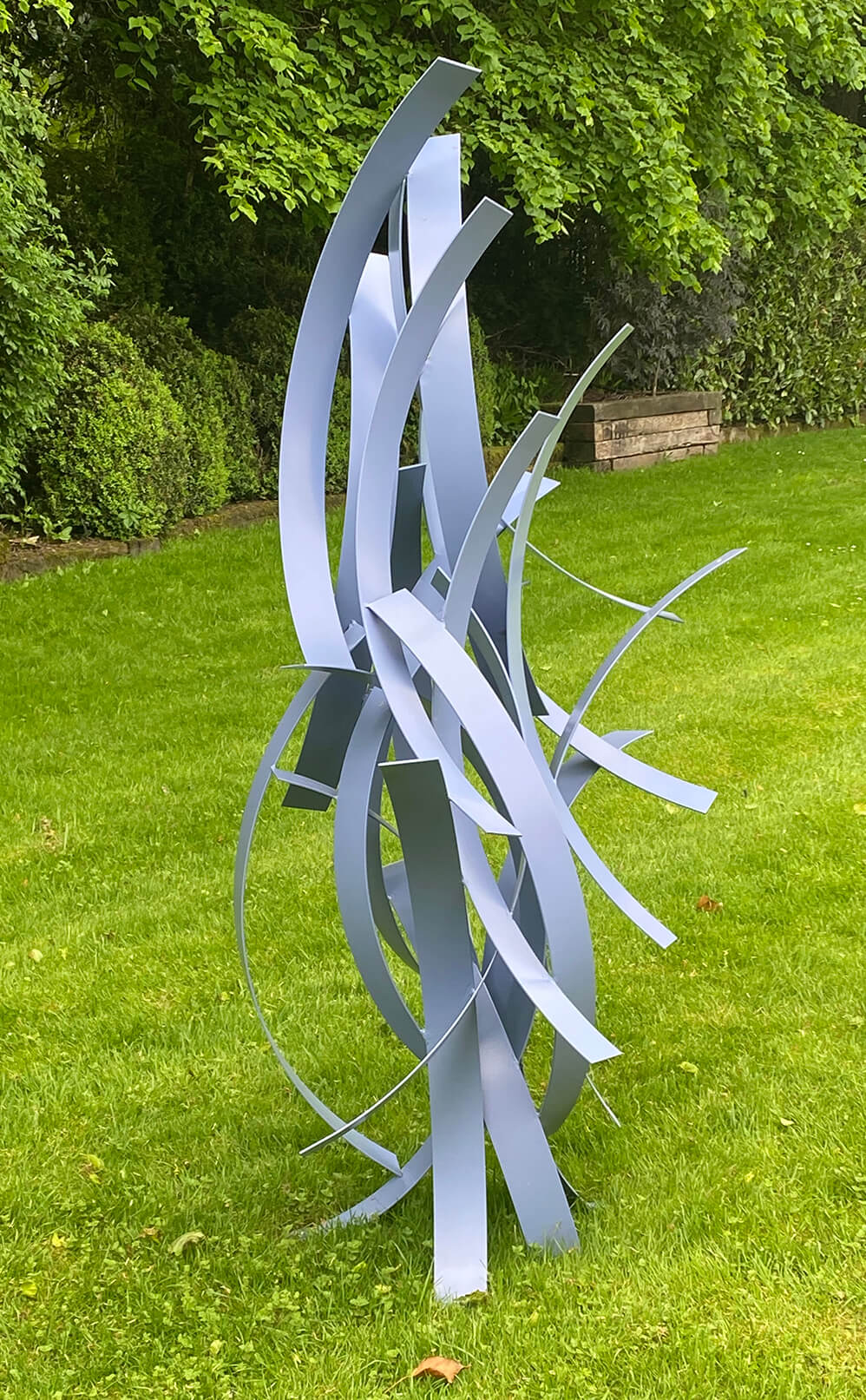 My Sculptures are influenced by West coast American architecture called “Googie” The origin of Googie derives from a John Lautner designed coffee shop built in West Hollywood. This style of architecture was born after the Second World War and became more notable during the 50s and 60s. 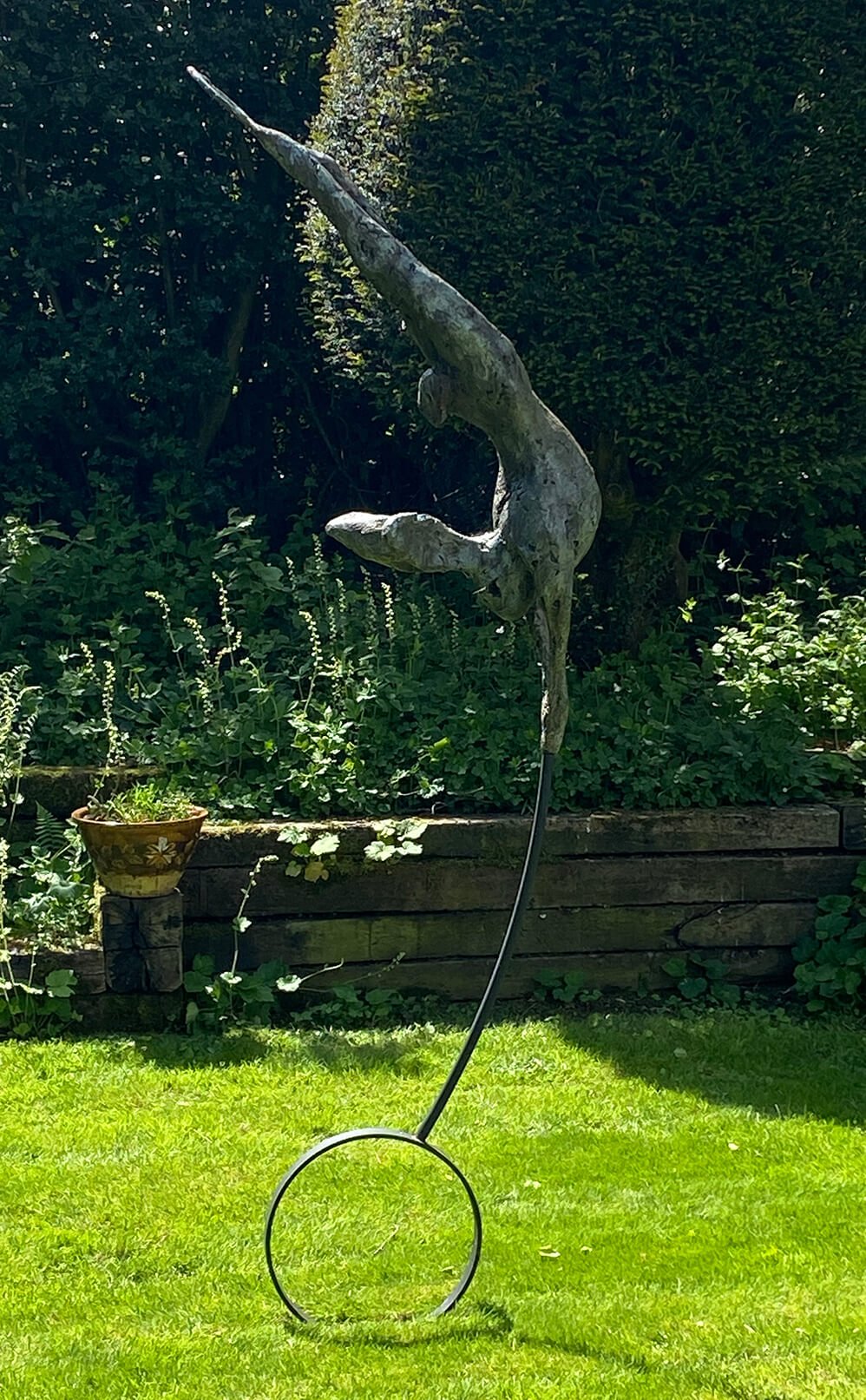 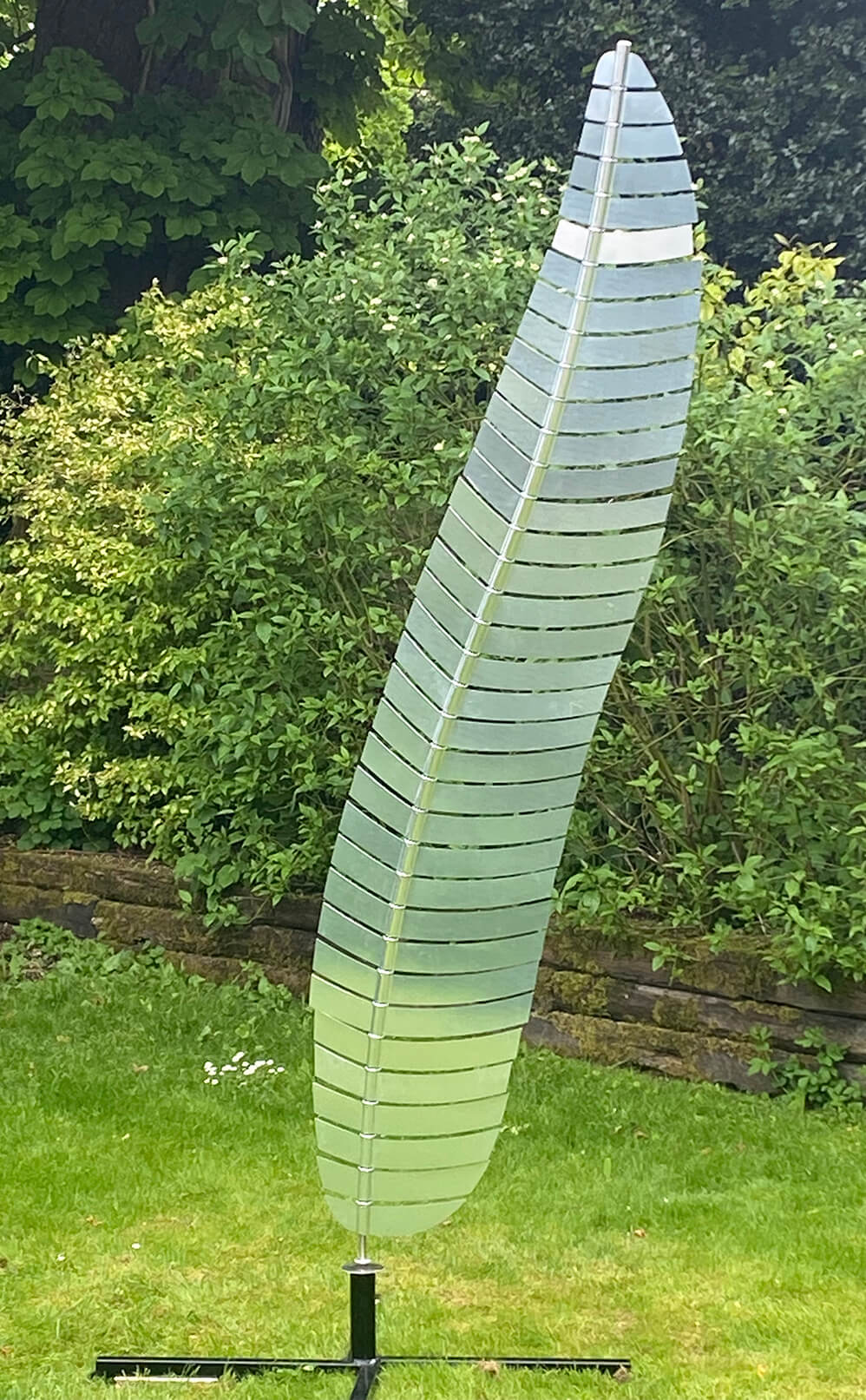 Quill is a piece which came out of my experiments to create a kinetic sculpture which makes the invisible wind and air currents visible, by being independently pivoted each vane can follow the tiny differences in strength and direction of a breeze as it passes by touching the metal and creating beautiful curves and ripples in the shape.

Unique stoneware ceramic with green glaze mounted on a limestone base.

Through Suspended Torso I wanted to capture the sensation of falling backwards. I enjoy creating sculptures that depict energy and movement within the human form , sculptures that have a tactile quality that draw you in so that you can experience new qualities and appealing forms from all angles.

This refers to the proportion of water held in the human body. This edition is based on a large commissioned work for a site in Gateshead UK . it is inspired by the physics of rising bubbles and their exponential acceleration and swelling due to lower pressures acting on them as they rise through a liquid. The incised bubble forms are gilt with platinum. 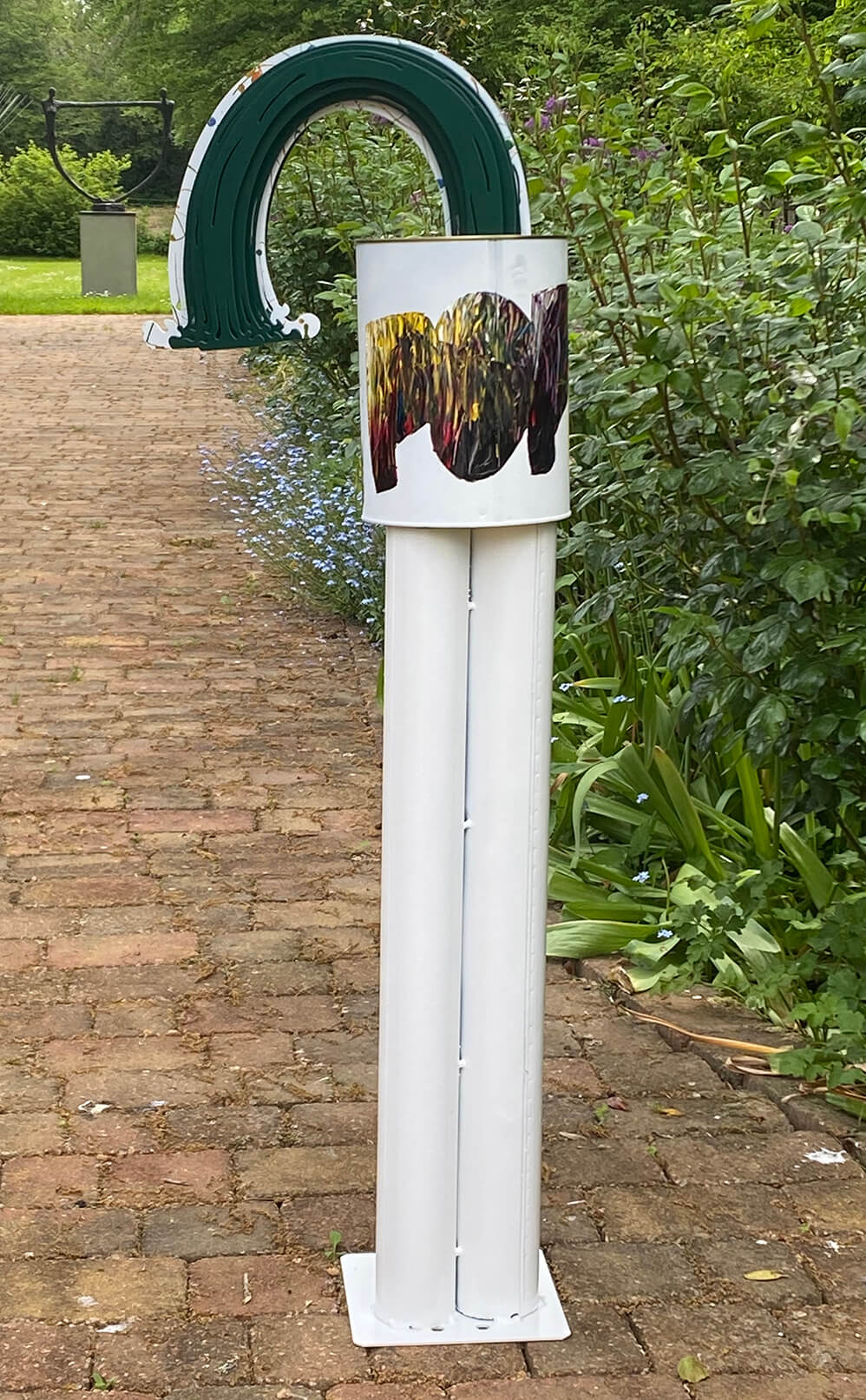 Inspired by the very loved cartoon character of Popeye. Conceptually translating spinach into steel and freezing it with a twist of nature – natural organic and strength. 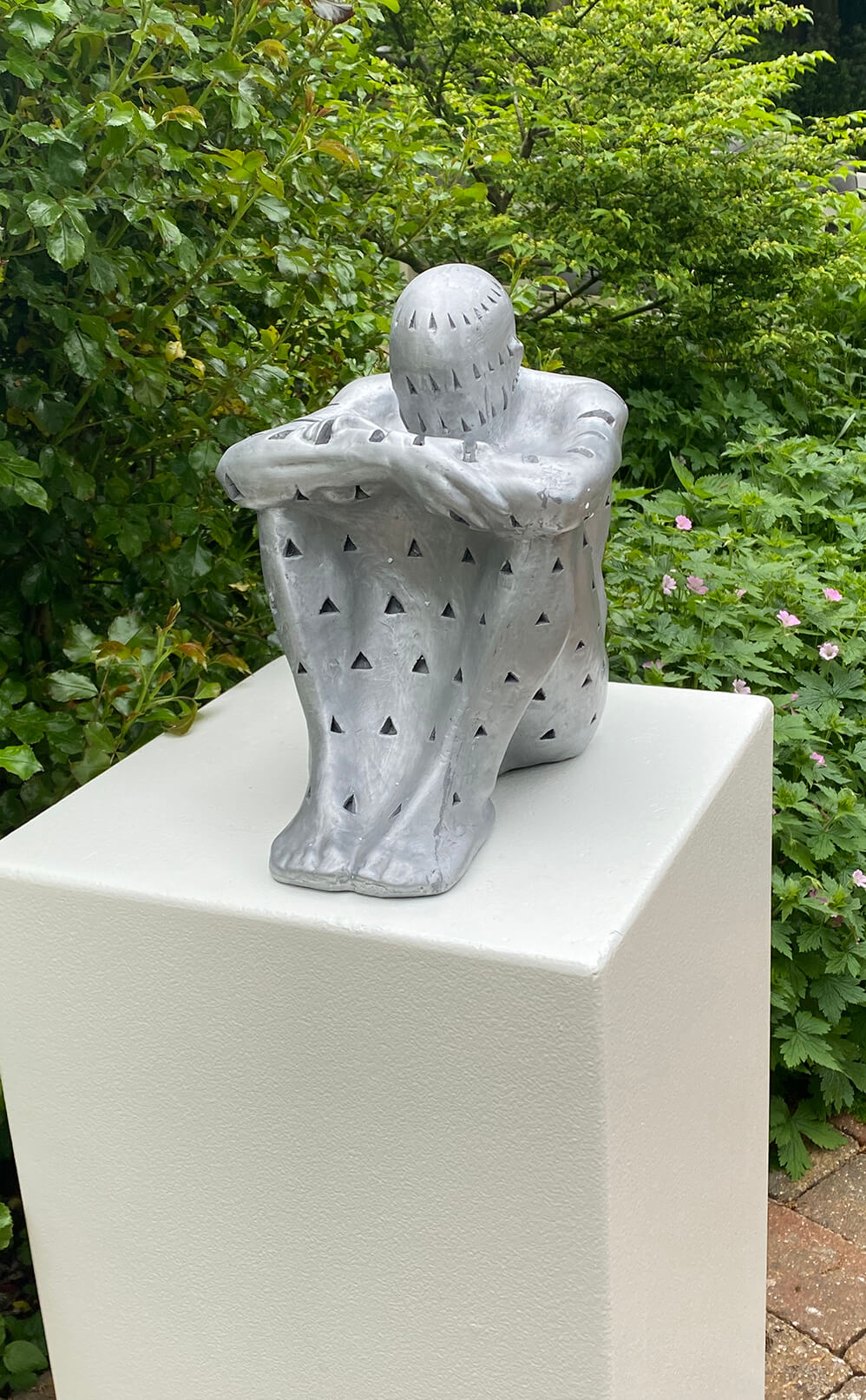 This work was made from an impulse to close out the world and concentrate on an internal power. I wanted to create a series of autonomous pieces impervious to doubt 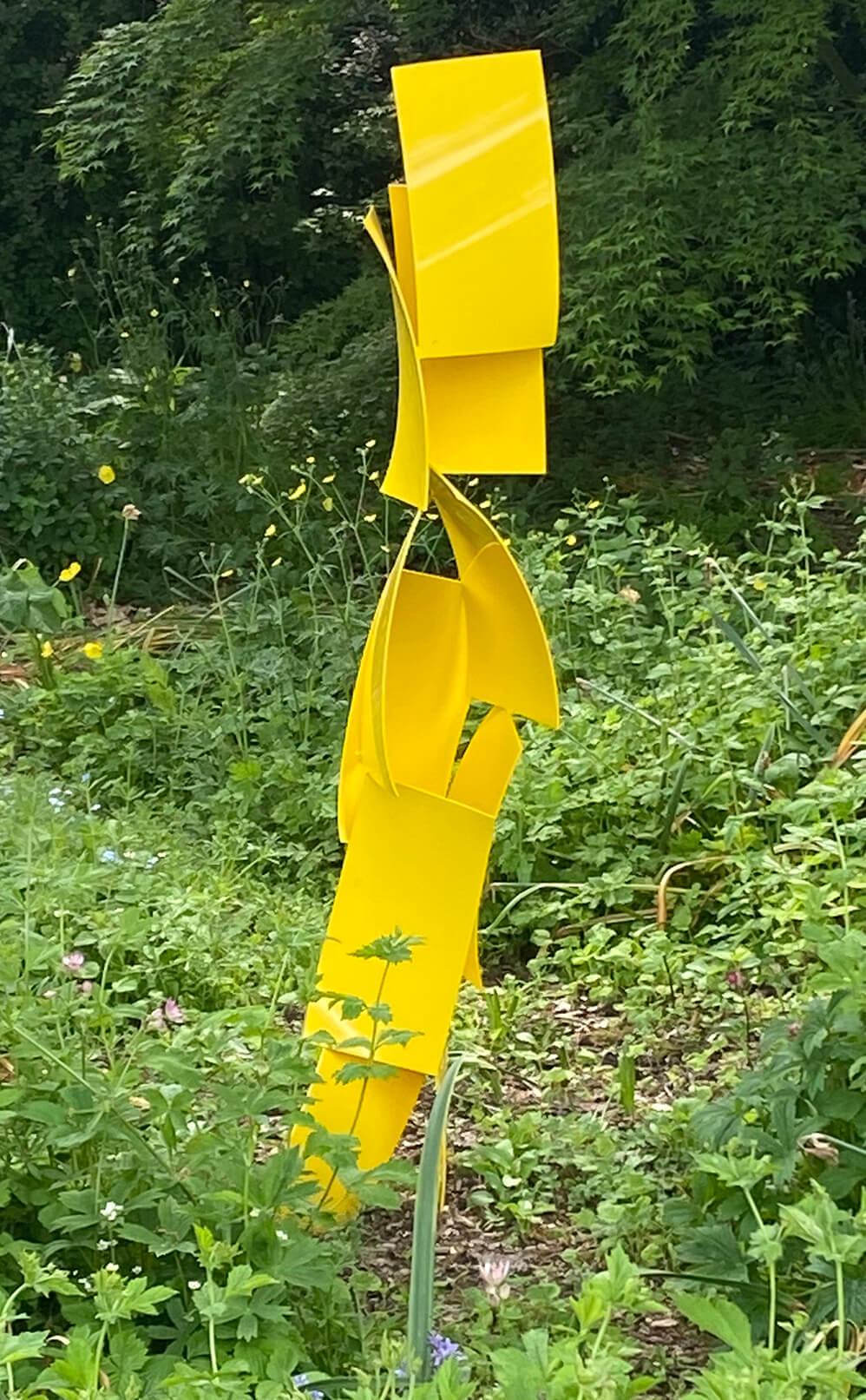 My Sculptures are influenced by West coast American architecture
called “Googie” The origin of Googie derives from a John Lautner designed coffee shop built in West Hollywood. This style of architecture was born after the Second World War and became more notable during the 50s and 60s. 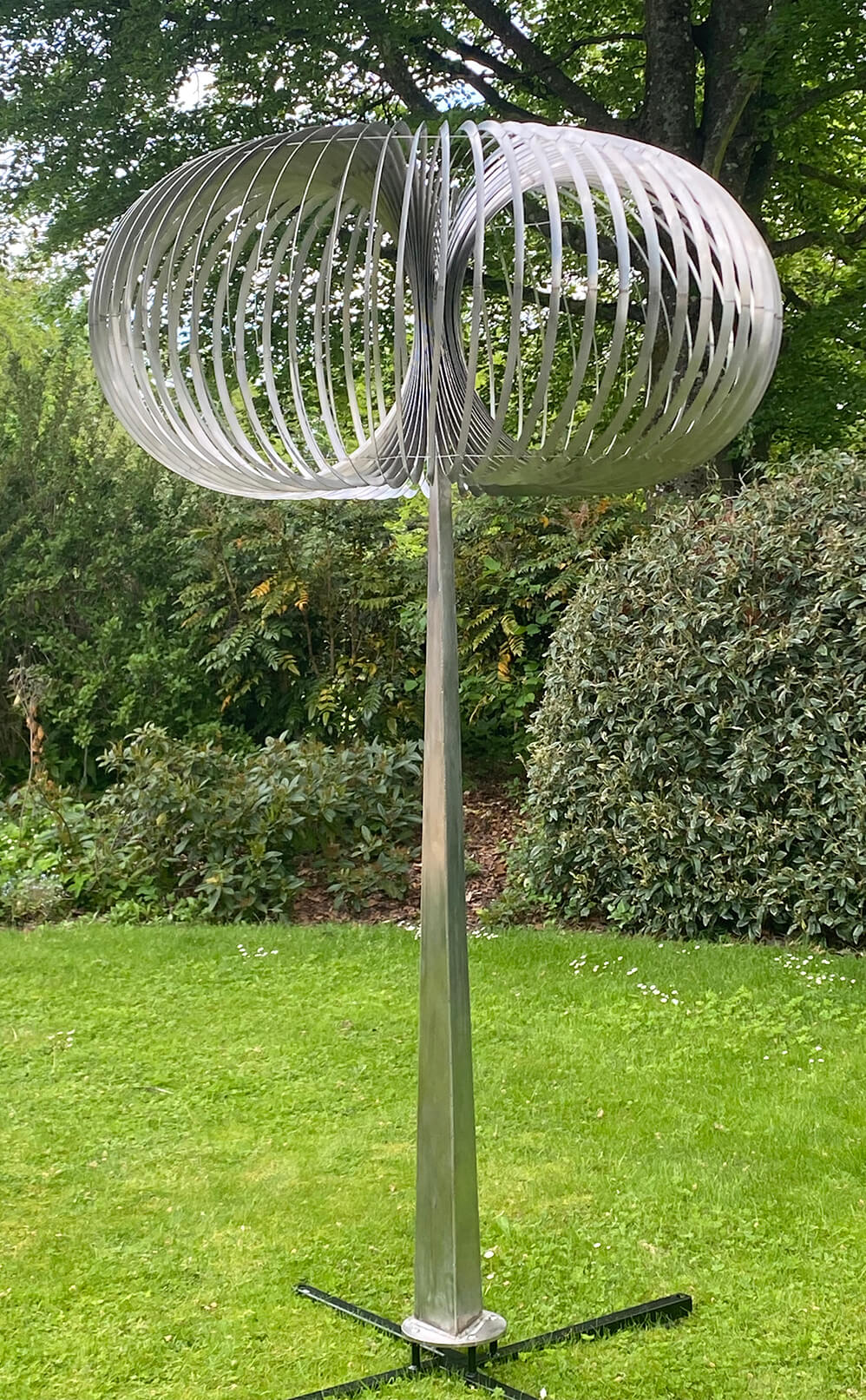 Toroidal was developed in 2019. It was one of those ideas I worked out in 3D CAD then had to work out how to make it exist in the real world and have the gentle calming effect I try to put in all my work. 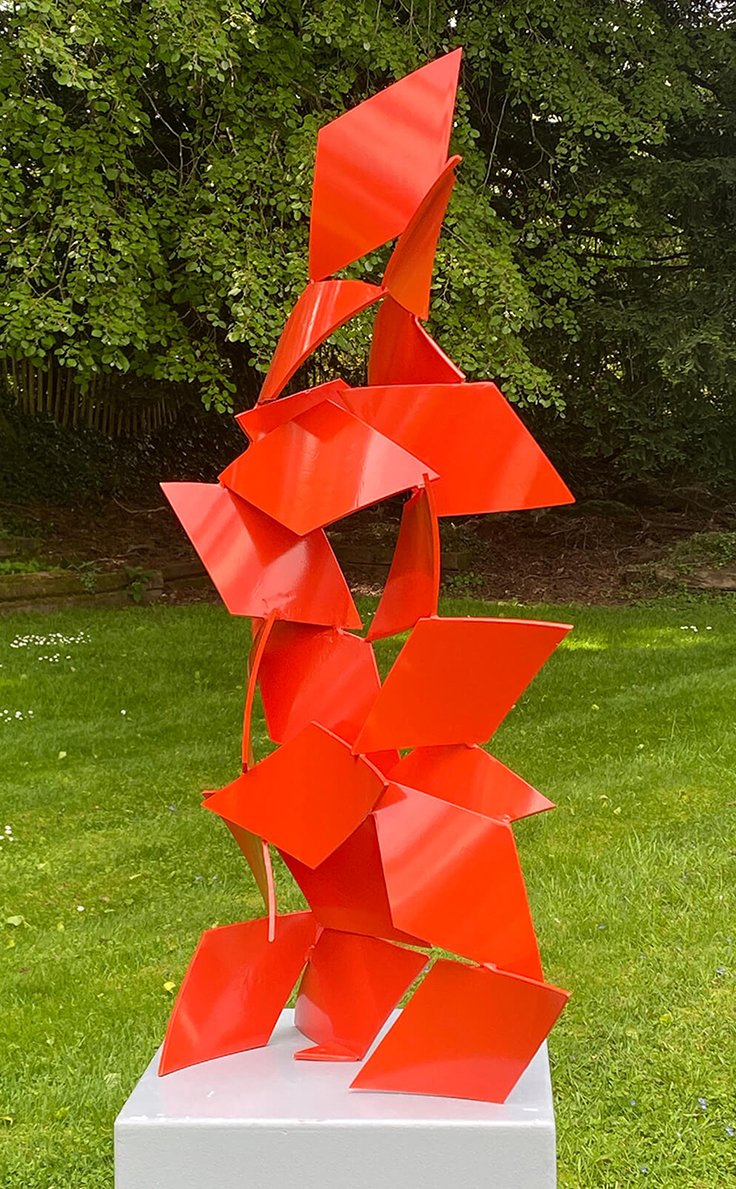 Please note that Tucson is not on show until 13th June but is
available to order at any time. 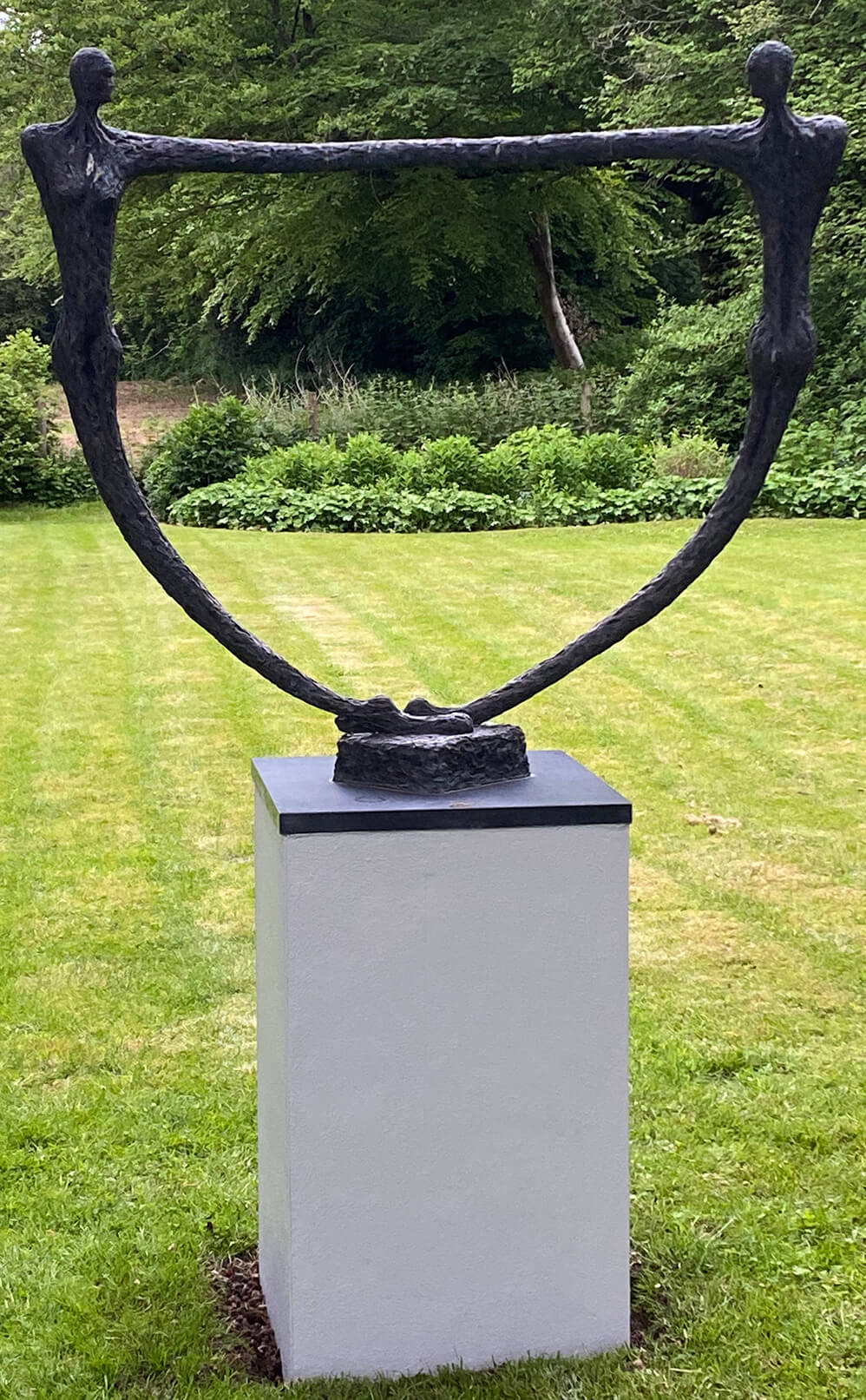 This sculpture is privately owned by the gallery and is not for sale. 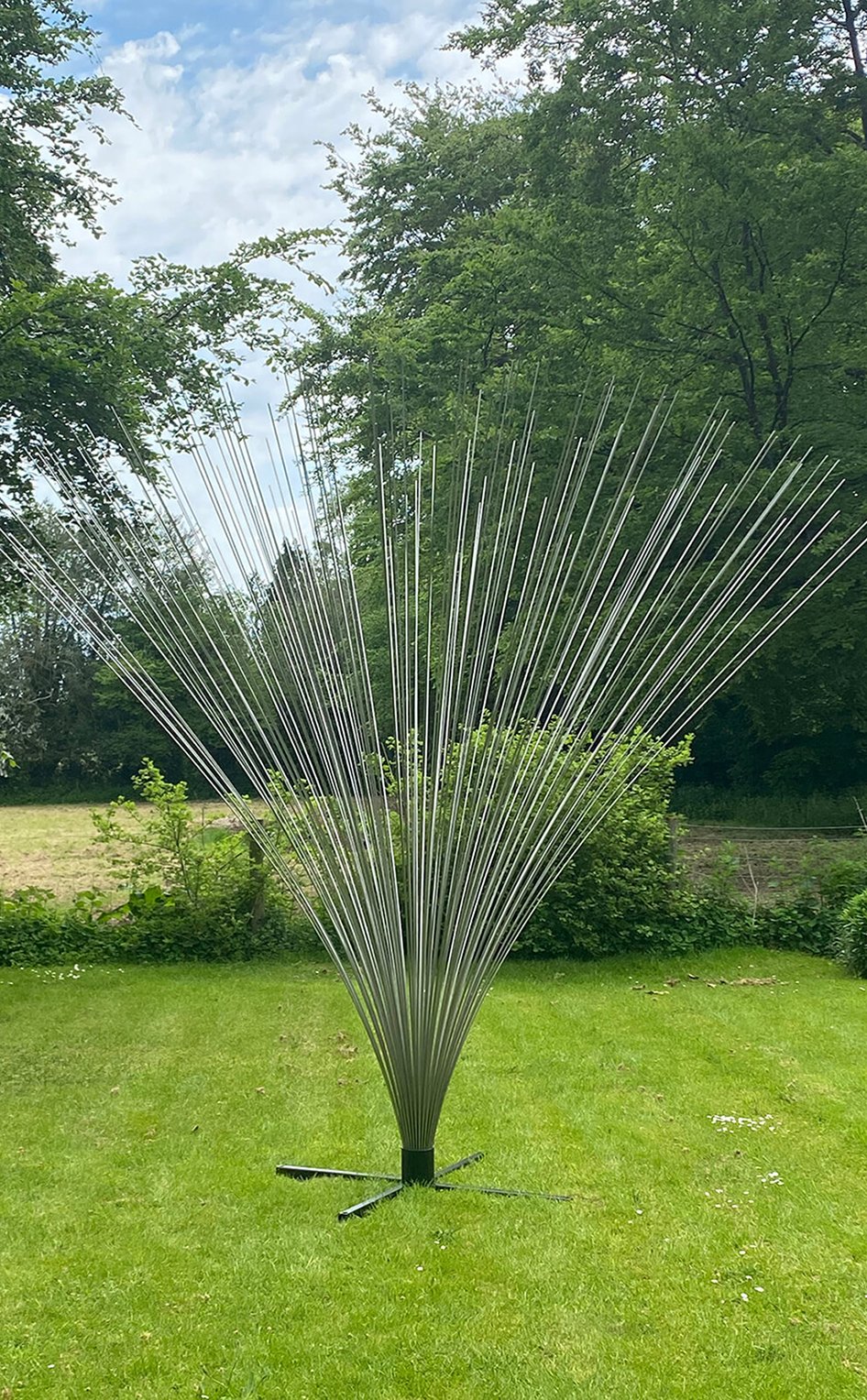 Ripple is the smaller sister piece to Wave I created last year. Its stainless steel rods which all come from a central hub are free to be moved by the lightest of air currents and tend to move in unison in the same way that a sea anatomy in a rock pool is moved my the sea water as it flows past. 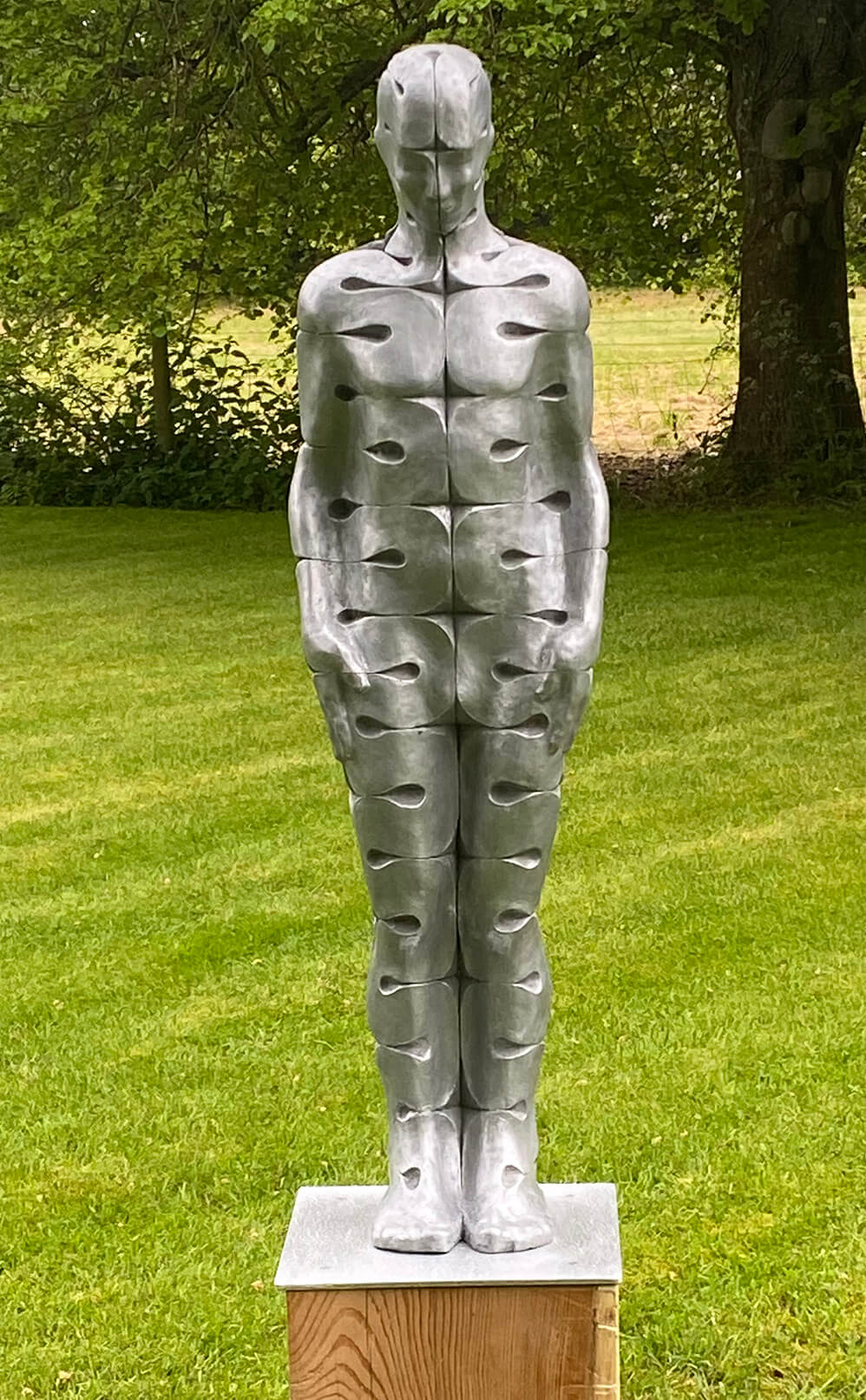 A continuous intertwining line describes a solitary standing figure. It was created during the first lockdown in 2020 and reflects the interred position in which we find ourselves. The work also looks to nature and the mathematics of botanical beauty to reframe our humanity relative to the natural world 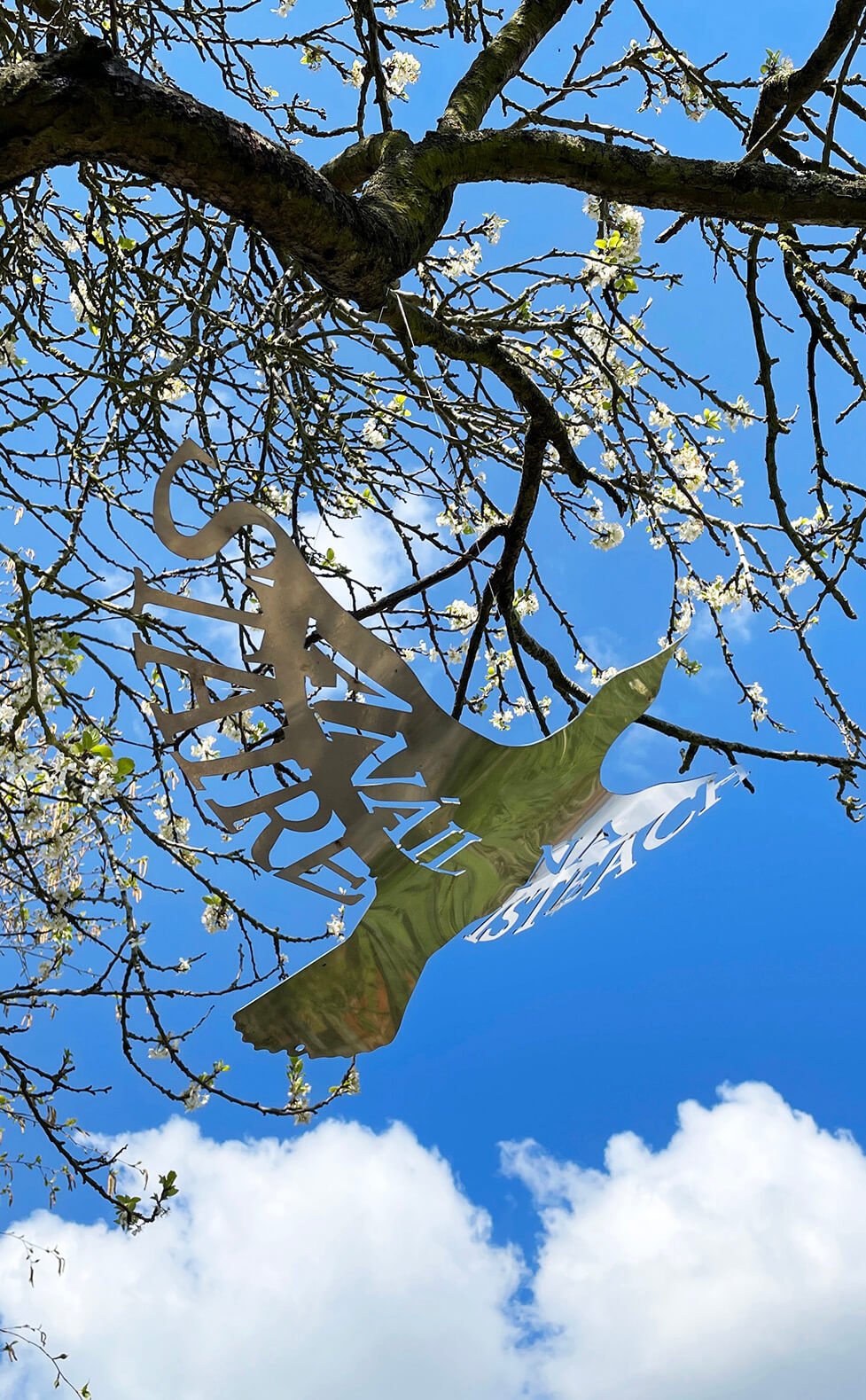 On the breadth of History – Nicola Anthony

The artwork features starlings with words for wings and was born after the artist spent two years discovering her Irish ancestry after growing up in England and discovering that there is Irish heritage in her family history. 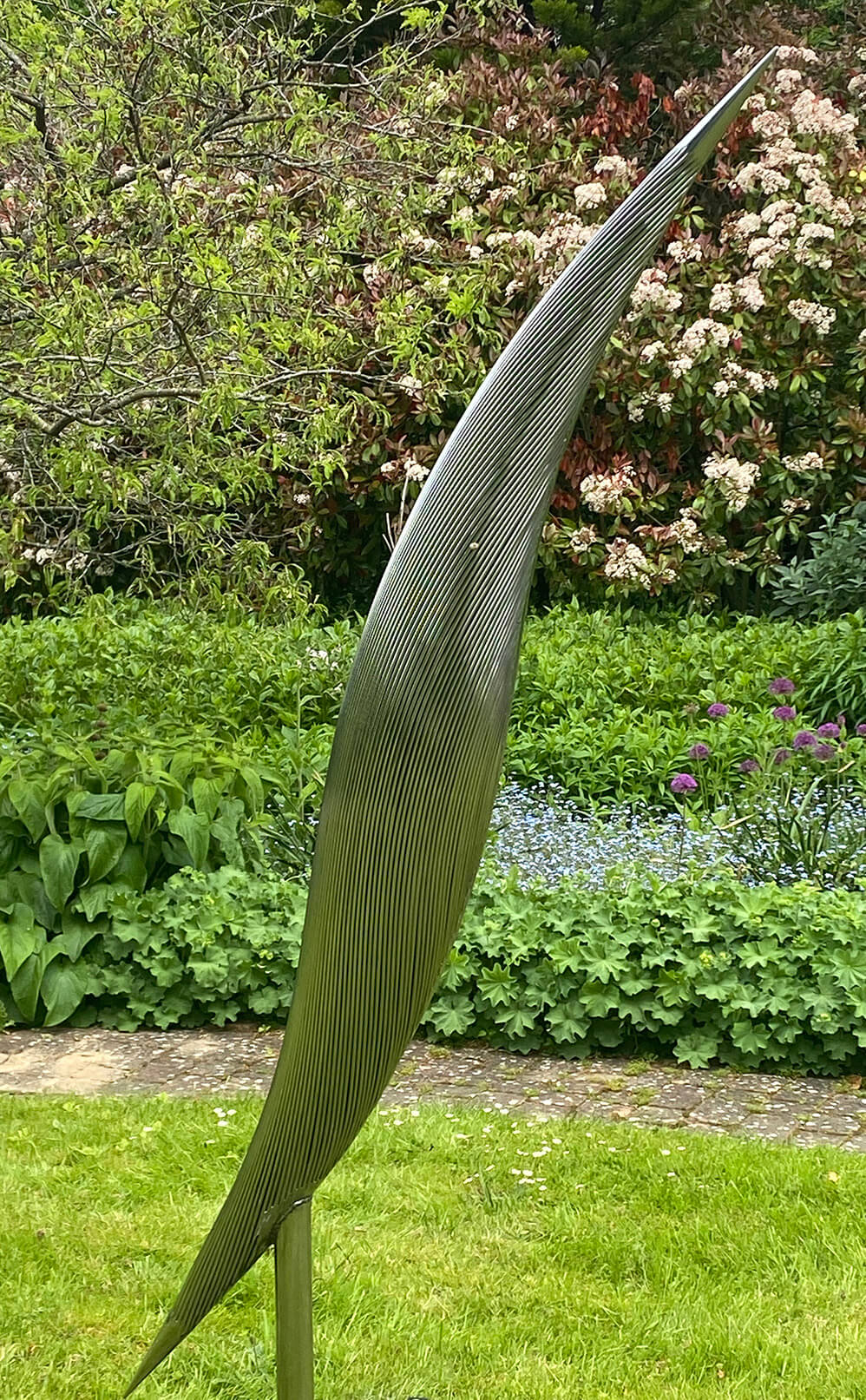 Hummingbird is a result of my brief encounter with one of these tiny creatures in the wild while walking in Australia. I probably saw the bird for 15 seconds but that shape and colour has stayed with me for several years now. 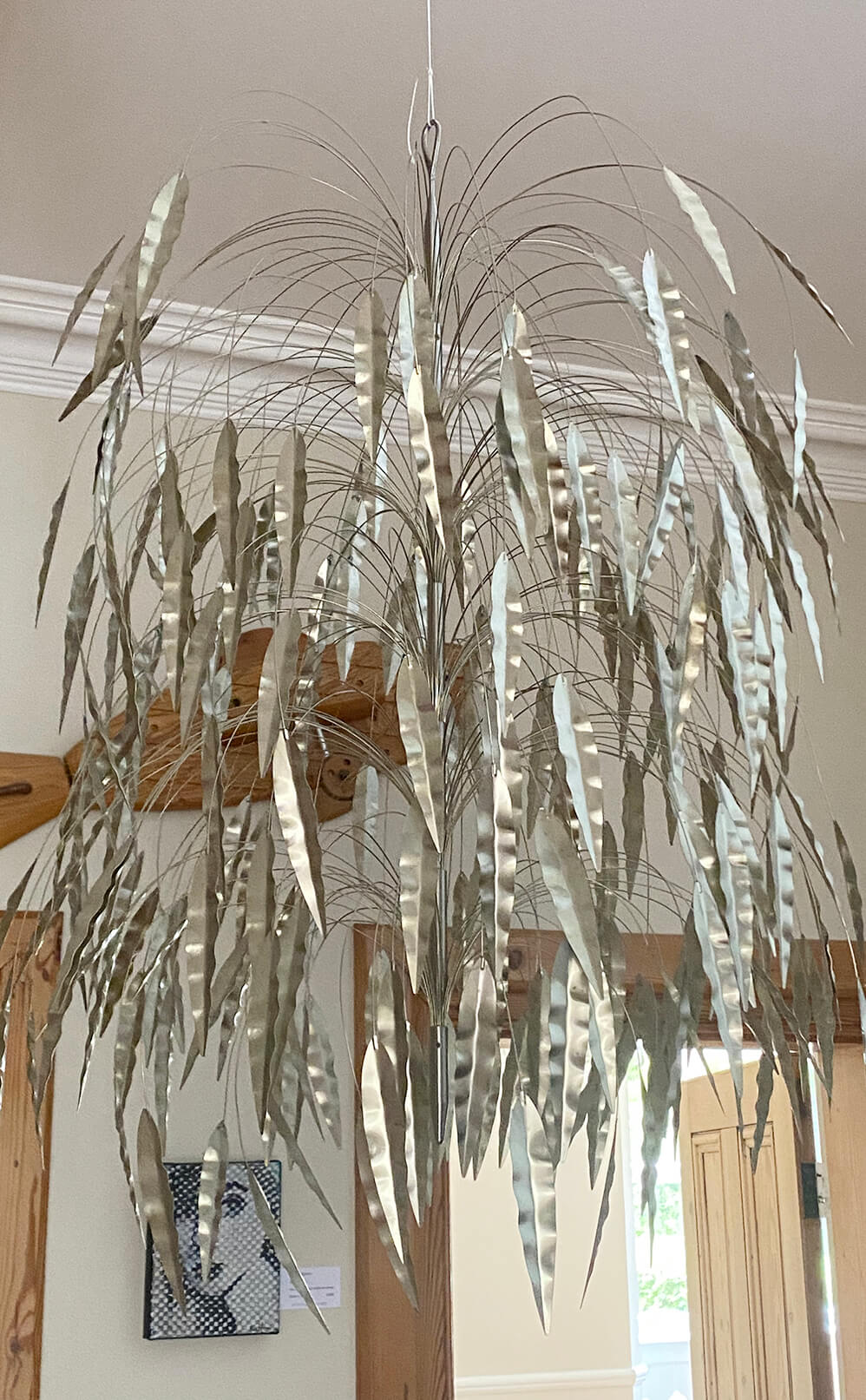 A weeping willow  was one of the first sculptures I ever made though it looked a little different, had many of the same qualities and still hangs in my hallway. Each leaf is suspended independently so that a slight air movement of an open door or someone passing by will add life to the piece. I have used nickle silver as it is my favourite and has the most beautiful colour of all the metals I use. As each tier is individually made and then adjusted to blend with the ones above and below they can be added or subtracted to suit 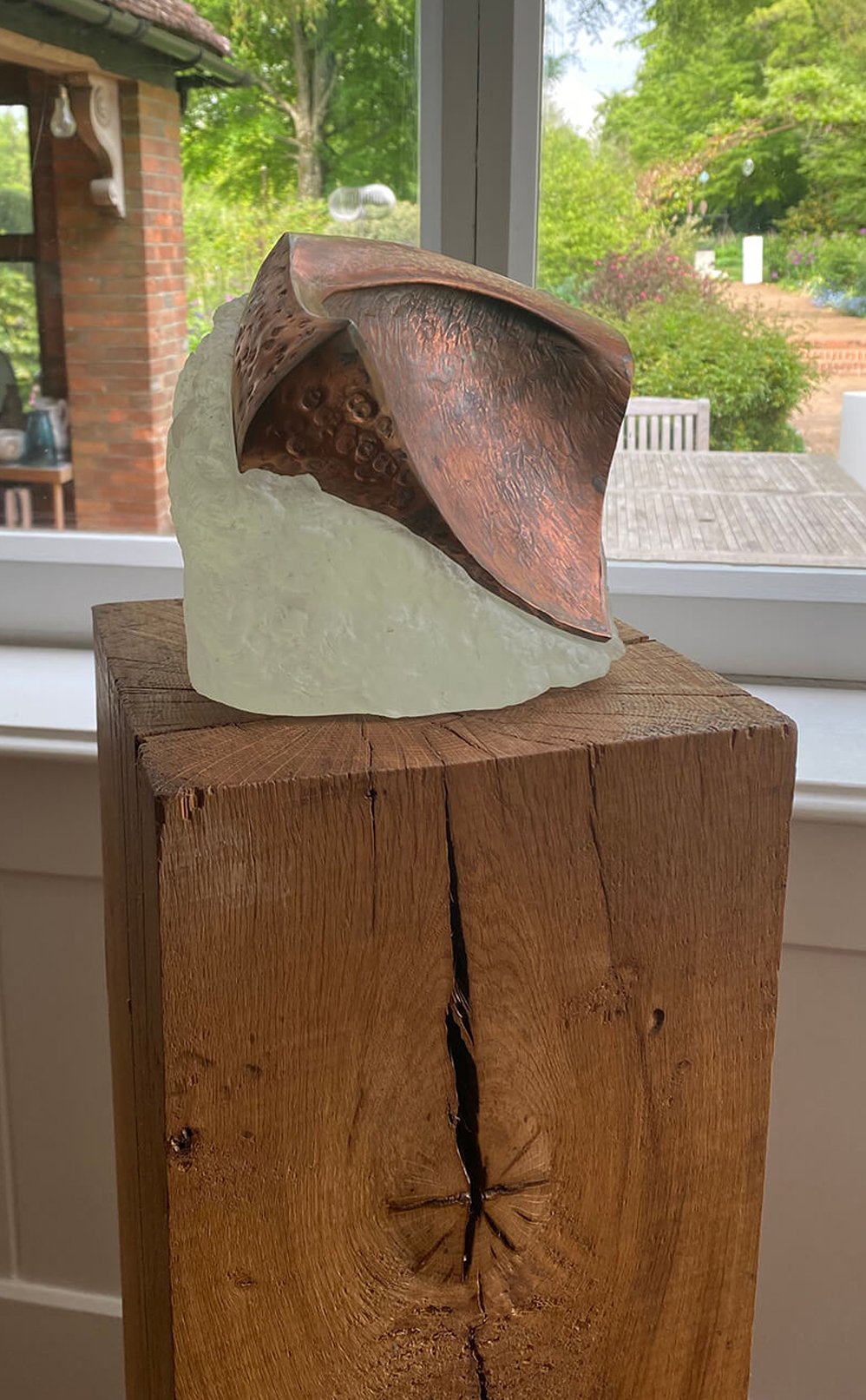 Places to swim I – Cara Wassenberg

Made during lockdown during the Covid 19 pandemic the ‘Places to swim’ series was developed in response to the impossibility of access to coastal and wild swimming and a longing for exposure to the elements of wind and water. As a child I often swam from the steep pebbled Dorset beaches in the summer. Deceptively calm waters often hid a potentially dangerous undertow above a ‘shelf’ formed by the current. 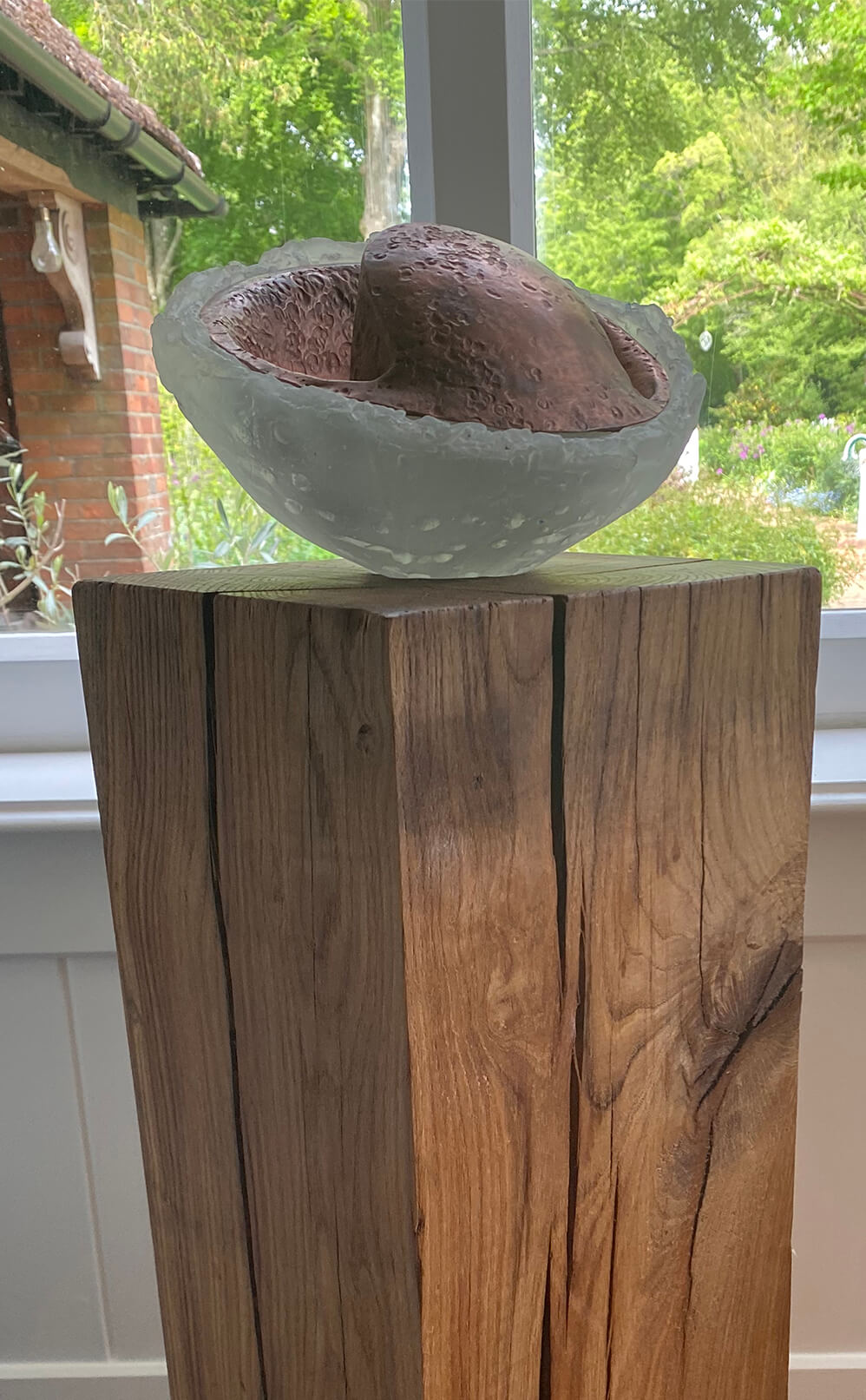 Made during lockdown during the Covid 19 pandemic the ‘Places to swim’ series was developed in response to the impossibility of access to coastal and wild swimming and a longing for exposure to the elements of wind and water. This piece has a very different feel to the first coastal piece in the series. The circular form feels less precarious and more self-contained. I wanted to express more of the comfort and security that I feel when swimming inland in contrast to the tidal challenges of beach swimming. 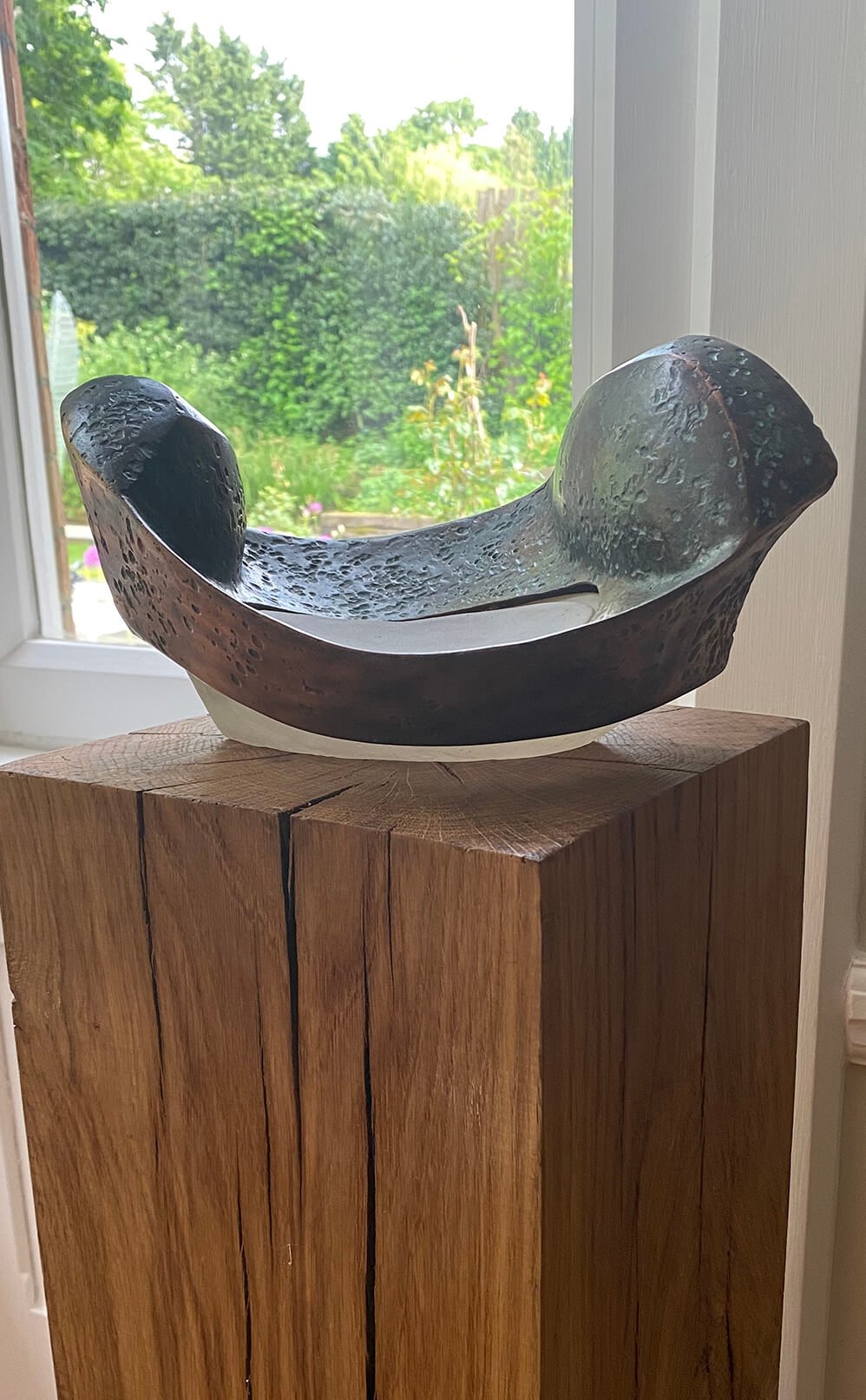 Made during lockdown during the Covid 19 pandemic the ‘Places to swim’ series was initially developed in response to the impossibility of access to coastal and wild swimming and a longing for exposure to the elements of wind and water. Lochan is based on two places that I visited in the Covid pandemic Summer of 2020 .A trip that took me to some of the northern most parts of the British Isles once restrictions were partially lifted. These were a tiny Scottish loch at the base of the Old man of Storr (21.8.20) on the Isle of Skye and a small pool in the southern part of the Lake District near Broughton in Furness (26.8.20). 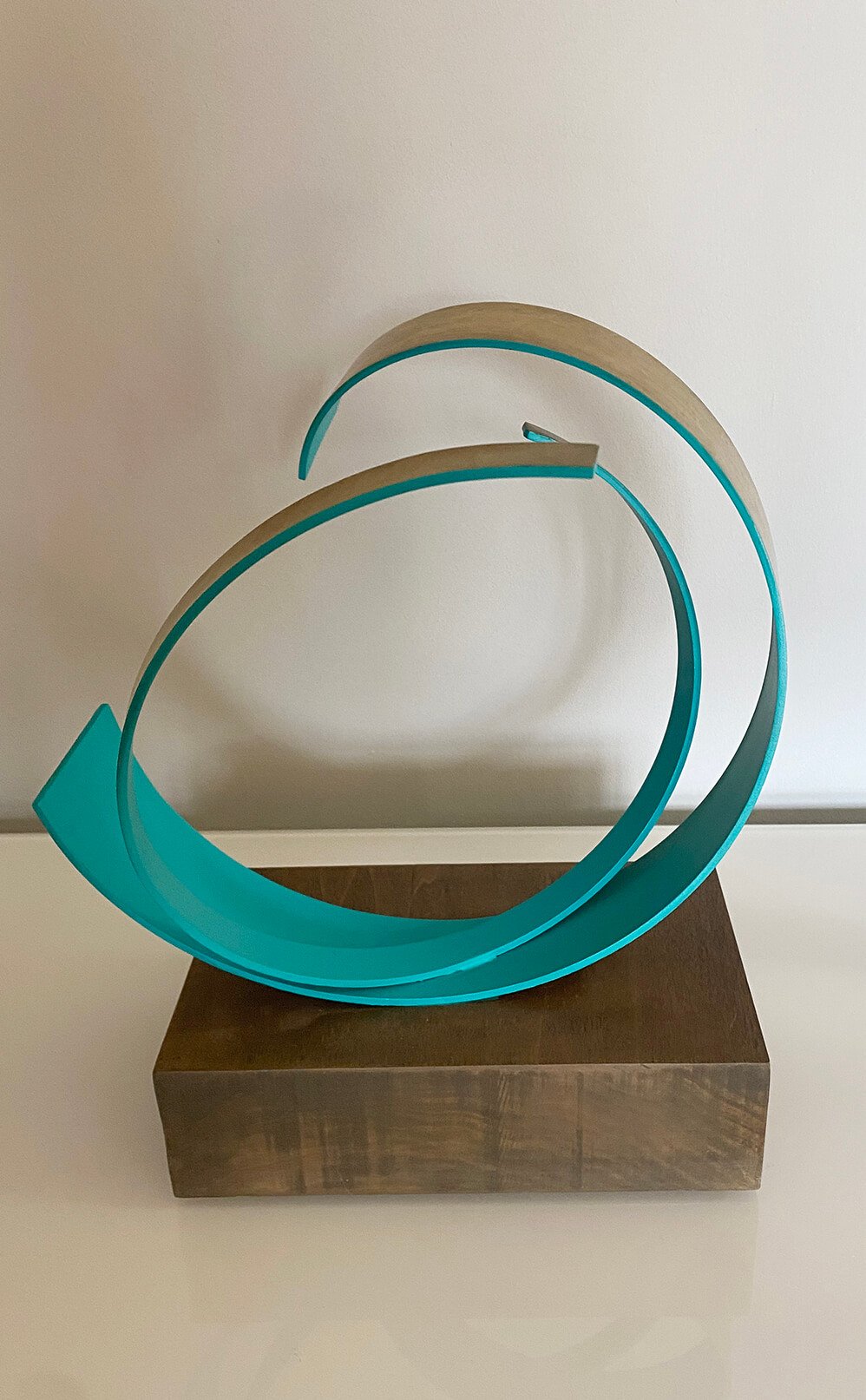 My Sculptures are influenced by West coast American architecture called “Googie” The origin of Googie derives from a John Lautner designed coffee shop built in West Hollywood.This style of architecture was born after the Second World War and became more notable during the 50s and 60s.Originally appearing first in commercial buildings used primary for restaurants, coffee shops, motels, gas stations and bowling alleys. 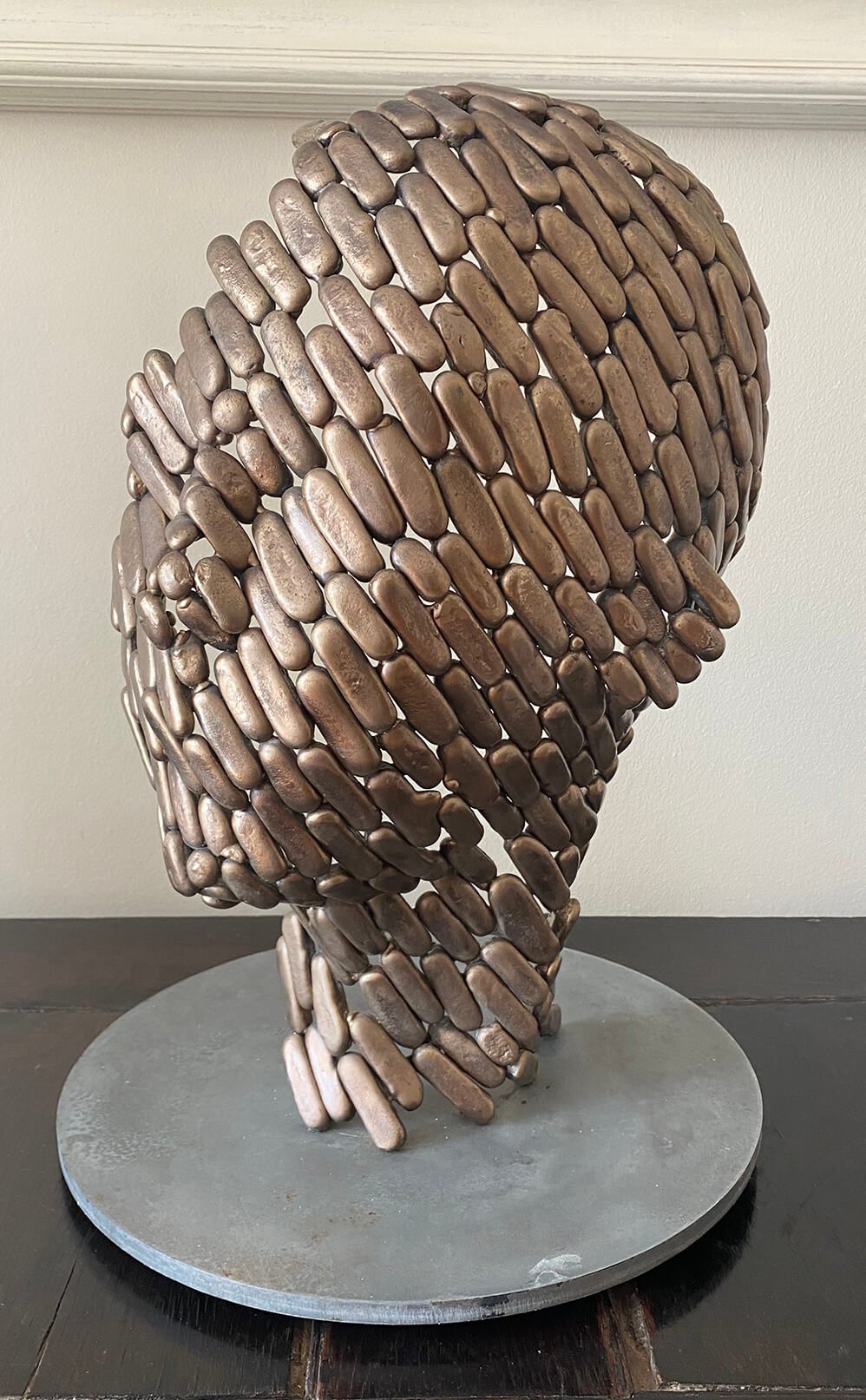 Each particle was individually poured into sand molds to form this head. The molten bronze pieces were then carefully positioned to tessellate inside a mold of plaster before being TIG welded from the interior. An exploration pushing the possibilities for cast bronze sculpture and suggesting a glimpse into an interior world. 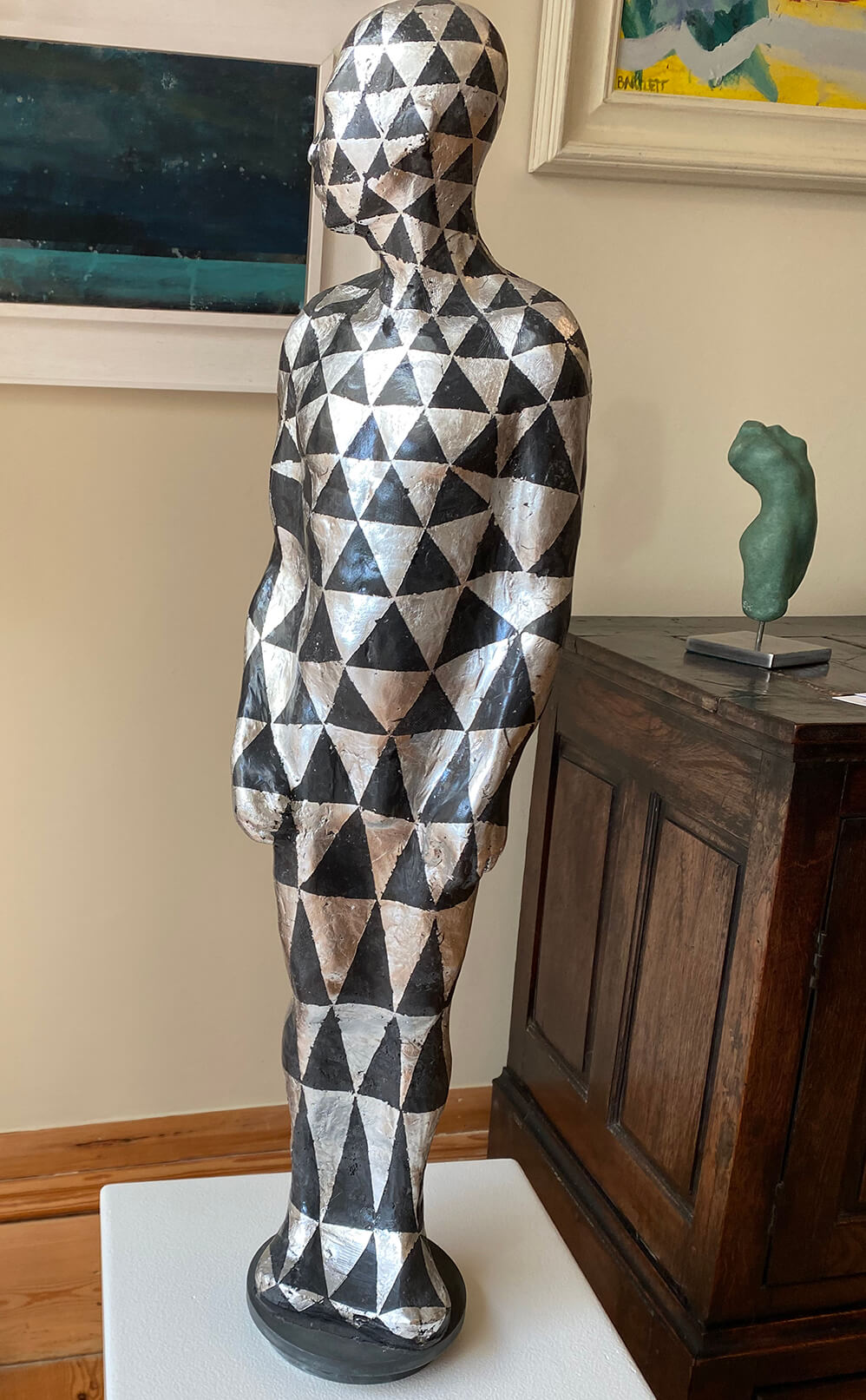 The tessellating skin of this sculpture becomes finer the higher it rises through the figure. The trapped gaze of the figure is implied through the twist in the pose. Exhibited at the british embassy and art fairs in china in 2017 this work toured china extensively with a number of other works by the artist 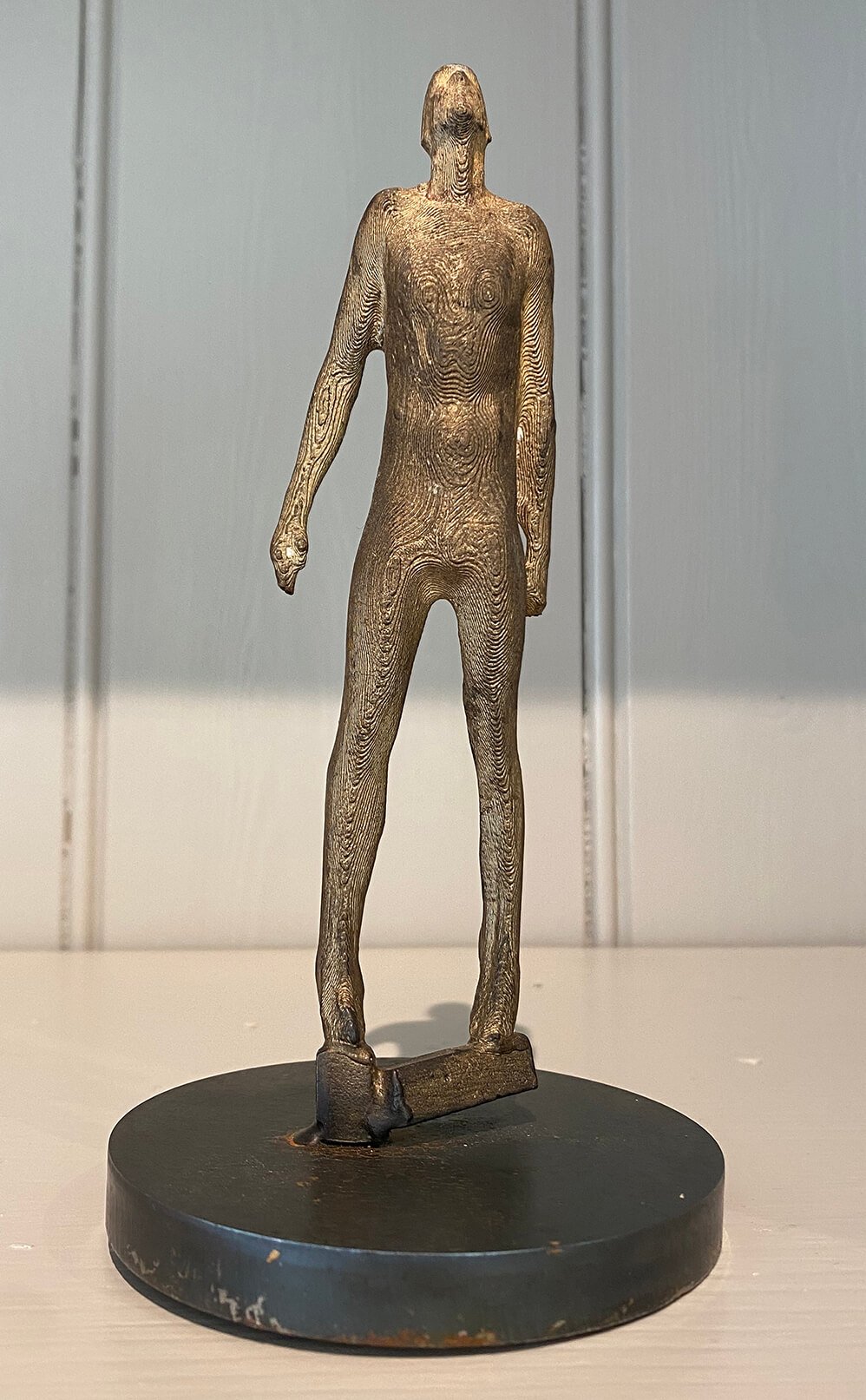 Based on a friend of the artist, this work was made by 3d scanning the subject, digitally manipiulating the 3d file to create this elongated fragmentary version of his body. The piece was then 3d printed and invested in a mould before being burnt away then cast in bronze. The figure stands on the sprue system used to cast it. 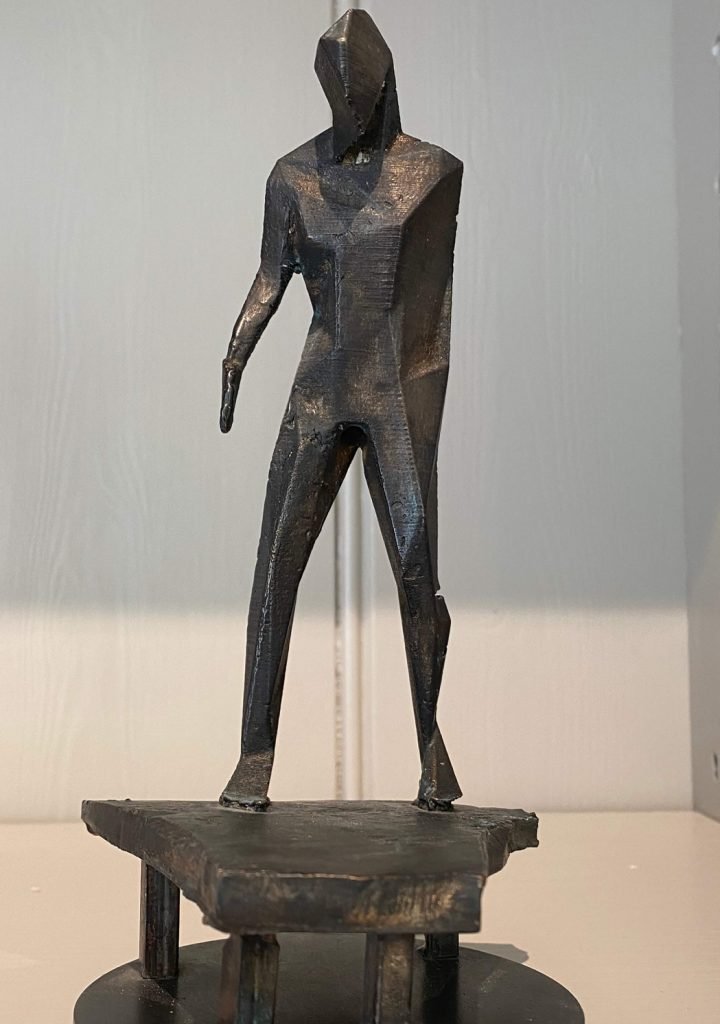 Modelled through an avatar in animation software this figure was tentatively posed to be inspecting the ground on which he stands, inspired by David Lynch’s film eraser head and dwells on our relationship to the ground beneath our feet, the figure stands on a smashed shard of wax, cast to bronze. 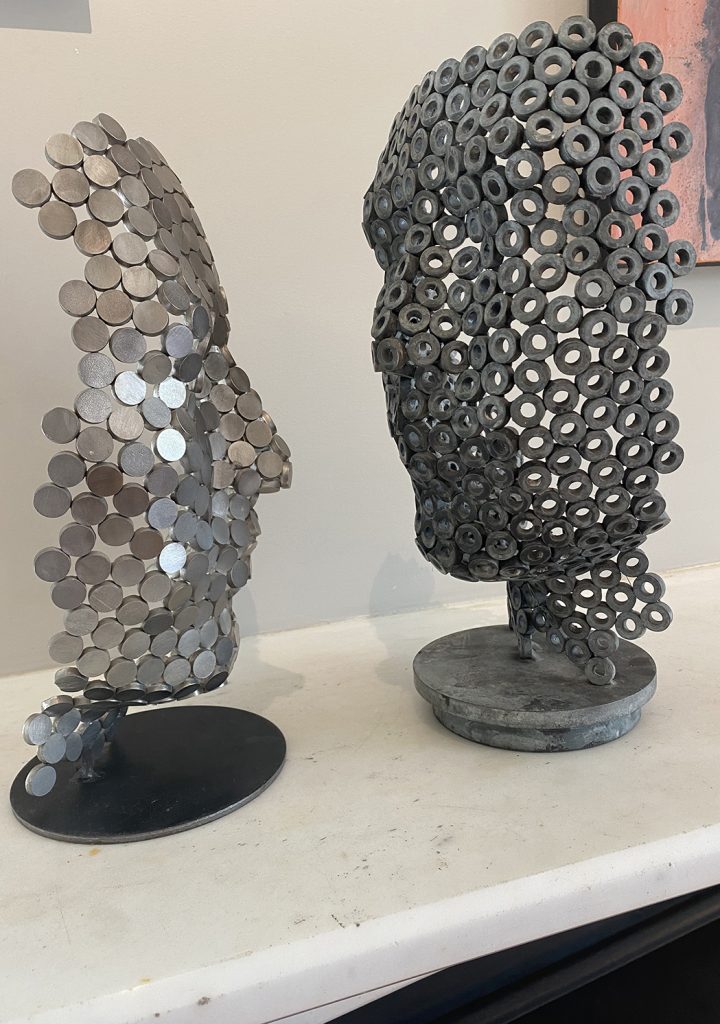 These two fragmentary heads are the maquettes for a monumental piece of sculpture the artist was commissioned to make in Newbury in 2012 entitled ‘binary conversation. The title refers to the digital communications on which we have increasingly become to rely. 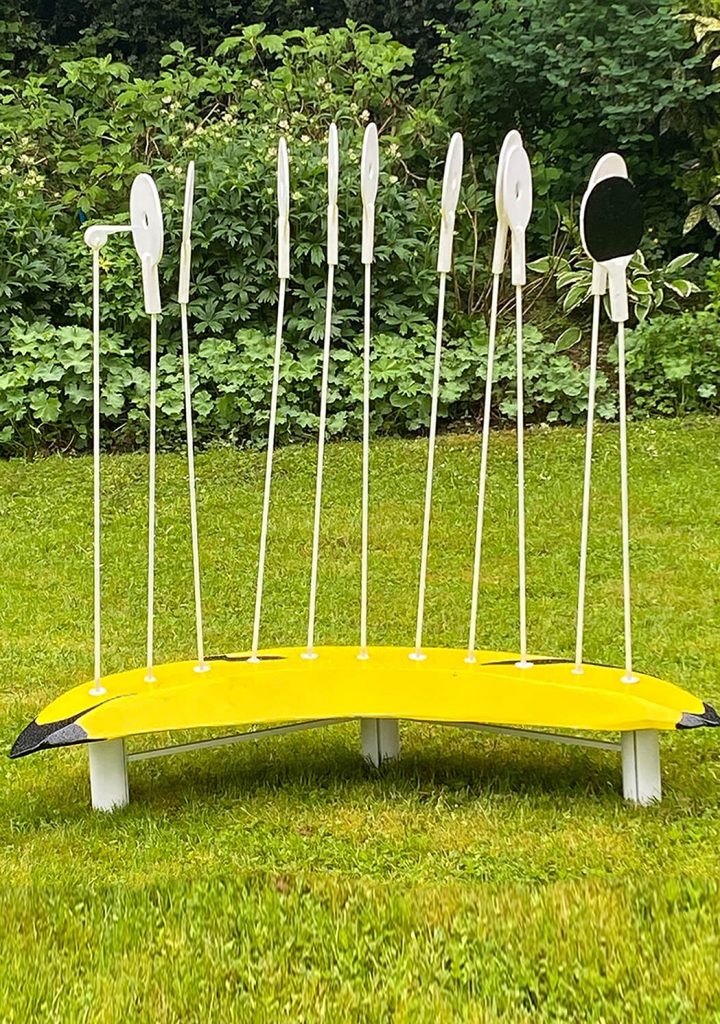 The saying derived from ball games ie football, table tennis and tennis. Inspired by the game I loved the most, I have combined nature and sport. This piece of sculpture mimics a swerving banana shot in the game of table tennis. Conceptually fusing the shot together with my local cockney rhyme of apples and pears.

If the work above has inspired you then we can help with commissions, framing and much more.

Find out what else we can do for you on our art services page.