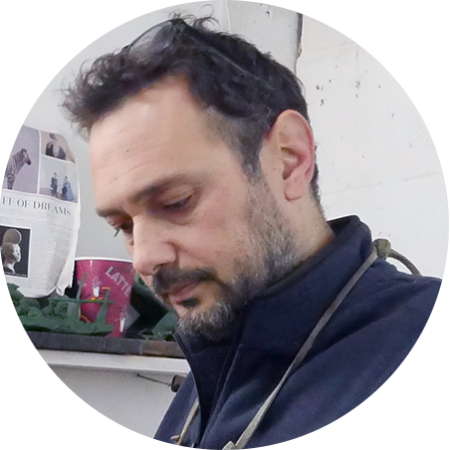 This is an investigative process that allows continuous experimentation.

Pedro Alves was born in Abrantes, Portugal in 1977, he currently lives and works in Winchester, England. In 2010 he completed his Fine Art degree from Winchester School of Art, University of Southampton in the discipline of painting. In the following years his creative practice gradually took a new direction towards bronze sculpture. Pedro is greatly inspired by the incomplete narrative, the symbolisms and the ambiguity present in ancient artifacts, from Etruscan, Sub-Saharan African and some Asian cultures. There is an attraction towards the ancient and modern, an intention to achieve timelessness and to make objects that transcend beyond the specificity of a period and a time. His pieces are characterized mostly by textures that range from intense and abrasive to a construction of lines and marks. That can described as textures agglomerated into forms. This is purely an outcome of the constant and never ending investigative working process, where the properties of the materials used craft the direction and evolution of the final piece. Pedro uses an assortment of materials such as paper, cardboard, wood, tape and string to translate his drawing into sculpture.

After a process of intuitive possibilities, continual modifications and refinements, the art piece is then covered in layers of heat-resistant plaster. When set, the whole is inverted and placed in a gas kiln.

During firing the plaster dries, paper and wood used in the making burn out, leaving a hollow shell. He then packs his plaster shell in sand and pours in the molten bronze at 1200 degrees centigrade, filing the space left by the paper and wood. When cool, the outer plaster and core are removed and the bronze receives the finishing cleaning touches, ending by applying patina to the bronze surface.

When safe and doable, he encourages the element of chance to enter the frame, such as organic distortion. This is an investigative process that allows continuous experimentation.

Click here to see our selected works by Pedro Alves